This week I spent most of my time implementing a solution for SIIM-ACR Pneumothorax Segmentation Kaggle competition and in today’s blog post, we will looking at how to work on Image Segmentation based problems in Pytorch with this competition serving as a useful example.

This blog post assumes the reader to have some idea about Image Segmentation, U-Net and PyTorch.

This post is based on a “code-first” approach with an aim to provide a reproducible training script that could then be used for other projects or Kaggle competitions. We train the model using pure PyTorch.

For a complete working notebook to follow along step-by-step refer here.

First, we download the dataset from Kaggle and convert the .dcm files to .png images for both masks and radiography images. Next, we create a PyTorch Dataset that returns the image and mask as a dictionary. Finally, we create the model using the wonderful Pytorch Image Segmentation library by Pavel Yakubovskiy(https://github.com/qubvel). Once we have the model, we create our training and validation scripts and train it using ComboLoss that was also used by the competition winner - Anuar Aimoldin. Winning solution can be referenced here.

Using pure PyTorch and some help from existing scripts, I was able to create a working solution that then landed in top-100 position on the private leaderboard with a dice score of 0.8421.

With that being said, let’s get started and look at the code pieces required to create such a solution step-by-step.

What is Image Segmentation?

Let’s say we have a 8x8 image, therefore as shown in fig-1, the idea is to predict a label - 0 or 1 for each pixel in the input image. This is precisely what Image Segmentation is.

In this competition, you’ll develop a model to classify (and if present, segment) pneumothorax from a set of chest radiographic images.

Specfically, given a chest radiographic image (fig-2 left), the idea is to predict a mask that shows the position of pneumothorax in an image (fig-2 right).

Now that we have looked at what we are trying to solve, let’s start with building our solution.

The first step is almost always getting the data ready. In the competition, the data has been provided as .dcm files. .dcm is short for DICOM format. DICOM is standard image format for medical-imaging information and related data. It consists of the image and associated metadata of the patient such as sex, age etc as well. Don’t worry if you haven’t seen DICOM before, there’s always a first-time.

I first learned about it through Kaggle too - specifically, RSNA Intracranial Hemorrhage Detection. There’s also this wonderful Some DICOM gotchas to be aware of (fastai) Kaggle notebook by none other than Jeremy Howard himself that serves as an excellent introduction to DICOM format.

Also, fastai library, has a medical submodule that makes it really easy to interact with .dcm files.

For us, we simply download the files from Kaggle first, and then re-use the prepare_png.py script by SIIM-ACR competition winner - Anuar Aimoldin. Let’s see how.

Downloading the .dcm files and converting to .png

The following lines of code will first download the dataset from Kaggle - this includes all .dcm files for stage-two of the competition including train and test folders. Next, the prepare_png.py script extracts the pixel information (or simply said “the image”) from the .dcm file, and stores the image as .png file in the output directory.

Running the above, should create a folder siim-acr in your current directory that has the following structure:

Therefore, now that our data has been downloaded and all files converted to .png images, we are ready to start building our Dataset class.

In PyTorch, a Dataset class almost always returns the image and label. Since, this is an image segmentation task, the label, in this case is also an image - specifically the image of the mask as in fig-2 (right).

One thing I didn;t mention in the previous section, is that when we downloaded the files, we were also provided with a train-rle.csv file which consists of two columns - ImageId and EncodedPixels.

So, to create the dataset, we read this .csv file as rle_df, and store it to df attribute of the Dataset class. In order to get an item from the dataset, we could get the corresponding image_id based on index i. Once we have the image_id, we could get the img_path and mask_path too and return the image and mask after applying the augmentations if present. If the augmentations are present, this class returns two image and mask tensors of shape (3, 512, 512) and (1, 512, 512) respectively or numpy arrays of the same shape otherwise.

One thing we haven’t done yet is to create train-val splits. This is standard for training any model. For this competition, we will doing a five-fold stratified split using StratifiedKFold from sklearn.

Running the above script creates a new .csv file which looks something like:

As can be seen, each image has been assigned to a specific fold. Thus, all our data has been divided into five folds. Once we have this, then getting the train and validation dataframes is as simple as running:

Train and Val Datasets and Dataloaders

We already have a Dataset class before, that accepts a DataFrame and returns image and mask numpy arrays or tensors based on augmentations. Since, we have not provided any augmentations so far, the returned values would be numpy arrays.

The train transforms add random horizontal flipping, random rotation and also normalize the image and mask to have values between (0, 1) instead of (0, 255). We also convert the numpy arrays to tensor using ToTensor() method in albumentations.

The validation transform only normalizes and converts the numpy arrays to tensors.

Now that we have defined the augmentations, we can create the datasets and dataloaders like so:

Great! So far so good. Until now we have created the Dataset class that accepts a DataFrame and returns image and mask as a Python dictionary. We have also defined some train and validation augmentations and added them to training and validation datasets.

Let’s visualize some images now. First, we create simple helper functions from torchvision examples like so:

And now visualizing an image with mask is as simple as: 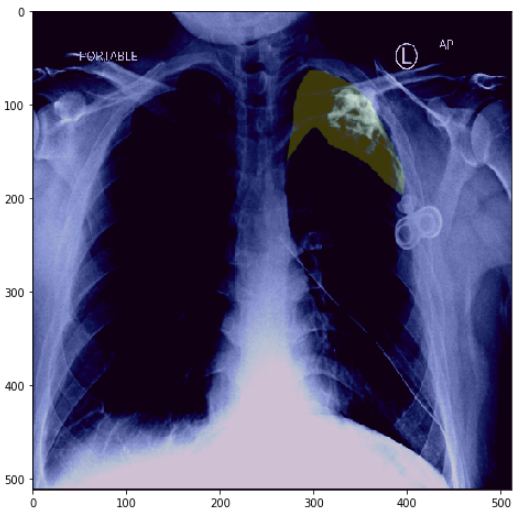 And to visualize multiple train images, we could do something like: 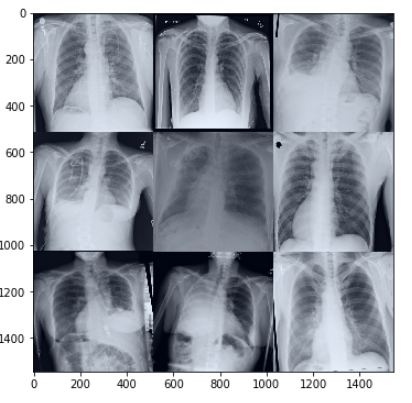 As can be seen from fig-3, some images are rotated, some are flipped - this is due to the train image augmentations. This way, our model sees a slightly different version of the same image every time in an epoch and will therefore be able to generalize better.

Now, that our dataset and dataloaders with image augmentations are done, we are ready to look into model building, training and validation.

To create our U-Net based model, we will be using the wonderful Segmentation Models library in PyTorch by Pavel Yakubovskiy. I promise to do a future blog post on creating a U-Net structure from scratch with a ResNet encoder branch, but for simplicity, for this introductory post, using the Segmentation Models library is a much easier option. If you’re keen to create a U-Net architecture from scratch, here is an excellent video by Abhishek Thakur.

Thanks to the library, creating our segmentation model architecture is as simple as:

Usually, one of the common loss functions for Image Segmentation is pixel wise Cross Entropy but for our introductory post today we will be using the same loss function as the winner of the competition.

This loss function is a combination of Binary Cross Entropy, Dice Loss and Focal Loss. I have written about Focal Loss before here.

From my understanding, we use a combination loss for stable training. Since the evaluation metric is dice, we are using dice loss here. We use bce for pixel wise comparison between predictions and ground truth mask, and focal loss due to the high class imbalance - the actual mask is only a tiny part of the whole image. I again promise to do a future blog post on the various loss functions, but for now, for simplicity we simply re-use the ComboLoss to train our model with (3, 1, 4) weights to stabilize training.

Great, so far, we have our model, loss function and also the optimizer and scheduler defined. We are now ready to train our model.

I reused the same training loop as in the ISIC competition below:

The above training loop is a basic one with possible gradient accumulation due to the small batch size in Image Segmentation based problems. I personally trained my models without gradient accumulation, but you could very well train your models by passing in accumulation_steps=N where N is the number of times you want to accumulate the gradients, thereby, increasing the batch size.

The train_one_epoch function accepts a dataloader, model, optimizer and loss_fn. We first move the model to cuda and put the model in train mode. Next, we iterate over the dataloader to get images and masks and move them to cuda as well.

Finally, we pass the batch of images to get predictions. Remember the output size is (8, 1, 512, 512) for three channel input images of height and width 512 and batch size 8. Once we have the predictions, as is standard for any training loop, we can calculate the loss and backpropogate to update the model weights. Finally, we also display the average loss in the training progress bar using tqdm.

To train the model we can simply run:

Hardly ever would one just be concerned with model training. It is imperative to have a good validation step to check model performance. In this step we create the model validation loop which is similar to the training loop. s

The above validation loop accepts a valid dataloader, trained model some metric to check model performance. It first moves the model to GPU, and puts the model in eval mode. Next we iterate over the dataloader to get the images and masks and pass the images through the model to get mask predictions. Finally, we take the sigmoid to convert raw logits to be in range (0, 1). Finally, we can calculate the dice score and display it in the validation progress bar with tqdm.

I hope that today, I was able to provide a good introductory and reporoducible script to train Image Segmentation based models. This was also my first experience with training image segmentation models and hope to write more about Unet architecture, loss functions and review image segmentation research papers in the future.

For a complete working notebook with a submission script to Kaggle and pretrained models, refer here. Running the script should take around 2 minutes on a P100.

As usual, in case I have missed anything or to provide feedback, please feel free to reach out to me at @amaarora.

We made use of prepare_png.py script from Anuar Aymoldin’s 1st place solution and also directly used the loss function.